The new report comes today from the federal Bureau of Economic Analysis.

The BEA news release and the full report contains this useful national map.

Washington nudged out California (2.2 percent) for the best performance on the West Coast. Talton notes,

This is a snapshot, so process it accordingly. But it shows that into the first half of the year, Washington continued its solid growth — and at a much better pace than the slow growth seen in most places.

As we note regularly, the economic performance within our state, as with most states with dominant metro areas, varies significantly. The strength of the Seattle metro doubtless accounts for most of that Q2 vitality, despite a dip in the information cluster.

The most recent available county employment data demonstrate the uneven pattern within the state,  with King County posting a 3.7 percent unemployment rate, contrasting with Olympic Peninsula and Eastern Washington rates of 8.0 percent or more. 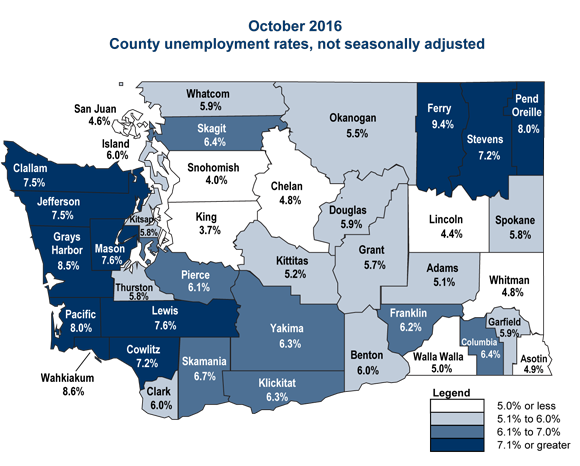 Speaking of metro dominance and economic vitality, a recent article by Ryan Streeter at New Geography looks at the continued growth of Austin, Texas as a major tech city and rival to Seattle and Silicon Valley.

Our conclusion here is that although Austin’s urban vibe is critical, its success has more to do with some distinctly Texan features, including development on the periphery, low taxes, affordable housing (particularly in comparison with coastal California) and less stringent regulation. It is the culture of opportunity, as much as anything else, that defines the Texas capital, and makes it so distinct from its other “hip and cool” rivals.

That culture has also defined Washington’s tech community. But Streeter, in passing, provides a cautionary note for our state’s leaders.

Austin is more of a regional talent destination than Silicon Valley. Since 1991, Austin has seen a net population increase of more than 33,000 people from Houston and 21,000 from Dallas. San Jose has lost thousands of people to both Texas cities over the same period of time…. During the same period, Austin attracted nearly 20,000 migrants from the Los Angeles metropolitan area, which sent only 15,000 to San Jose. Austin also saw thousands of arrivals from San Diego during the same period.

The other tech-heavy, talent-centric cities in the Northwest also prefer Austin. Net migration from Seattle to Austin has been positive since 1991, while San Francisco and San Jose have lost a combined 25,500 people to Seattle in the same time period.

Among the reasons for Austin’s success (and, do read the entire article for insight and context): housing affordability.

The key to maintaining housing affordability is to allow supply to keep up with demand. This requires avoiding the restrictions on suburban housing development that have been adopted in places like California, Portland and Seattle, and avoiding the high development charges typical of more restrictively regulated markets.

Washington’s Q2 GDP growth is something to celebrate. And the appetite of regions like Austin to capture that vitality is a reminder that successful communities adopt policies designed to attract and retain jobs and investment — policies that cultivate the culture of opportunity.