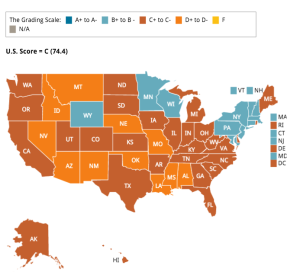 As Seattle Times reporter Claudia Rowe writes, Washington gets an overall ‘C’ grade, but the news is worse than that average score suggests.

During the past 12 years, the gap in achievement between poor students and others in Washington has widened more than in any other state, according to an analysis released Thursday.

When interpreting student performance, much depends on whether you’re a glass-half-empty sort of person or more of a Pollyanna, and Washington ranks above the national average in many areas, including overall scores, household income and the number of adults with a college degree.

But between 2003 and 2015, low-income fourth- and eighth-graders lagged significantly on state tests, while nationally those gaps have narrowed. Only Washington, D.C., with a stunning 24-point difference between its poor and middle-income kids, showed greater disparities.

The achievement gap should be considered an opportunity gap. As we’ve written,

Education expands opportunity. By 2020, 70 percent of Washington jobs will require postsecondary education or training. Preparing our students for these opportunities requires high-quality education at every level.

The Education Week information reinforces our Opportunity Scorecard measures on our Achieve priority.

Our state ranks 18th based on an Achieve (education) score of 82. The state performs well in 4th grade reading, 8th grade math, and associate’s degrees awarded. However, the high school graduation rate is well below the median (ranking 40th in the nation). The state also ranks among the bottom half of all states in bachelor’s and advanced degree production.

Our goal is to be a Top 10 state. As Education Week’s new report shows, we’ve a long way to go. Nationally, Education Week writes, performance is subpar. Ranking in the top 10 will mean more when overall national performance improves. But it’s the right goal for us now.

The nation receives an overall grade of C on its 2016 report card… Massachusetts earns top marks this year …and the only B-plus awarded. Consistently a strong performer, the state improved on the B it earned in 2015. Maryland, New Jersey, and Vermont—also fixtures at the top of the state rankings—earn grades of B this year. At the other end of the grading scale, Nevada ranks last, with a grade of D and a score of 65.2. Mississippi and New Mexico also receive Ds. Most states (32) earn grades somewhere between a C-minus and a C-plus.

One proven way of addressing the achievement gap is providing the educational alternative of public charter schools, which here have been placed in jeopardy by an unfortunate state Supreme Court decision. Yesterday we wrote of an initial bill proposed by a pair of Spokane legislators. The Washington Research Council today writes that another measure is about to be introduced.

A bipartisan group of legislators is backing legislation that will allow Washington’s public charter schools to stay open. The bill “makes a series of updates which include directing charter school funding to come from the state’s Opportunity Pathways Account, which contains state lottery revenues not restricted to common schools.”

Sen. Steve Litzow, a Republican, and Rep. Eric Pettigrew, a Democrat, said their bill will get a hearing in the Senate Early Learning and K-12 Education Committee next Tuesday, Jan. 12. Litzow and Pettigrew stressed the importance of charter schools to low-income and minority students in particular…

We applaud efforts to preserve public charter schools, reinstating the will of the voters and providing a vital education alternative to students and parents.