Washington receives an overall “small business friendliness” grade of C+ in the latest survey from Thumbtack. As the graphic below shows, the state’s composite grade reflects a range of scores on subindexes. 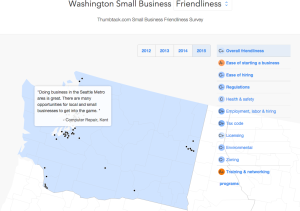 The lower marks on tax and labor regulations are not surprising. Small business surveys frequently show dissatisfaction with the state’s regulatory and tax policy. As we wrote last fall in our research report,

A report to the Department of Commerce in 2013 noted… that perceptions of inefficiency damage the state’s reputation for business.

Other sources confirm that observation. In its latest survey of manufacturing companies, the tax and consulting firm McGladrey found that 73 percent of Washington employers cited state regulations as negatively impacting growth, higher than any other state. A survey of Association of Washington Business members documented widespread frustration with Washington’s regulatory environment among small businesses. Another survey by the services marketplace Thumbtack and the Kauffman Foundation found that Washington small business owners give the state a D+ with respect to state regulatory burdens. (emphasis added)

Our “employ” priority addresses these concerns.

Expanding opportunities means encouraging and rewarding innovation and risk-taking and providing employers with a predictable and efficient regulatory and tax environment.