Excise taxes are a mixed bag of taxes imposed on purchases of various products. The Tax Foundation summarizes:

It won’t surprise many to learn that Washington comes in pretty high in the Tax Foundation’s ranking: 10th highest, with a per capita excise tax burden of $683. 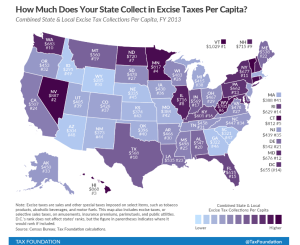 TF calls out the top five highest and those with the lowest.

Vermont comes in highest in the nation with $1,029 in total state and local excise tax collections per person. Rounding out the rest of the top five are Nevada ($887 per person), Hawaii ($868 per person), Minnesota ($817 per person), and Connecticut ($812 per person).

It’s hard to draw many conclusions from the data. The high tax states include some with income taxes and one without; same at the bottom. Still, it’s always interesting to examine the variety of tax burdens and see where we rank.