Today, the National Alliance for Public Charter Schools released its annual ranking of state charter school laws, Measuring Up to the Model: A Ranking of State Public Charter School Laws, Eleventh Edition in conjunction with National School Choice Week. For more than a decade, this report has analyzed how well each state aligns its charter school law to the “gold standard” model law, A Model Law for Supporting the Growth of High-Quality Charter Schools: Second Edition. States are ranked by their composite score, which is based on 21 critical benchmarks like accountability, authorization, flexibility, performance-based contracts, and funding equity.

“Charter schools are not a one-size-fits all value proposition and state laws governing their creation have a huge impact on their quality and ability to innovate,” said National Alliance for Public Charter Schools President and CEO Nina Rees. “This report is a tool that blue and red state policymakers and advocates can use to bolster their state’s charter school laws and improve the quality of the sector by requiring best practices and guaranteeing charter school freedoms to innovate.”

Here’s the snapshot for Washington. 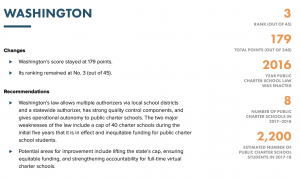 As the report notes, Washington has a cap on charter schools, which limits access to these alternative public schools. A timely Manhattan Institute report examines how charters are working across the nation. Overall, the results are positive. (We know there will always be exceptions.)

Dozens of studies of public charter schools have reached a consistent conclusion: their presence benefits disadvantaged students who attend them as well as the students who don’t. Studies show substantial gains in academic achievement, especially for lower-income and minority students, amounting to weeks, or even months, of additional classroom learning each year. As compared with similar peers in traditional public schools, charter students also have better outcomes on a variety of important social indicators, from higher college attendance and persistence (the percentage of students who return for their second year) to lower rates of teen pregnancy and incarceration.

MI scholar Max Eden takes a close look at the national research. He begins by taking a look at research showing weak positive outcomes, then follows by examining studies using more rigorous methodologies to compare student performance. (Read his article for more detail and to fill in the gaps.)

According to a recent report from the National Center for Education Statistics, charter school students perform, on average, no better or worse than their traditional public school counterparts. But that finding reflects the aggregate performance of all students in each kind of school, without consideration of vast differences in who attends the schools and where they are located. To meaningfully evaluate charter schools, as compared with their traditional public peers, comparisons must be made between comparable students in each context…

In 2016, researchers from Columbia, MIT, and the University of Toronto reviewed the 15 such studies that had been conducted to date. They found positive academic effects in 12 studies and no statistically significant effect in three others. In no case did the researchers identify a negative effect. The authors noted that the largest positive effects were found for students in low-performing urban areas.