Stateline has mined economic data to report on changes in the economies of the 50 states and District of Columbia. Washington ranks 10th, the same ranking we had in 2013 and 2010. Follow the link to an interactive map that includes brief data on each of the states. D.C. ranks No. 1, also unchanged from 2013 and 2010. 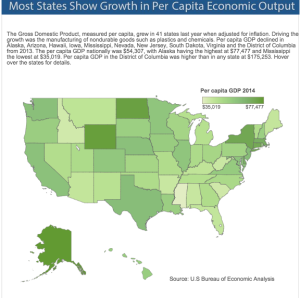 While the recovery has been far from robust, most states are experiencing growth.

Forty-one states experienced economic growth in 2014 compared to the year before, when measuring GDP per capita and adjusting it for inflation. It was down in nine states and the District of Columbia, according to a Stateline analysis of BEA figures per capita. The per capita figure, which is a state’s GDP or economic output divided by the state’s population, can make it easier to compare states with varying populations.

As we’ve written before about interstate comparisons, state data often obscures important differences in the intrastate economy. Metropolitan Seattle, which has enjoyed strong growth fueled by aerospace and technology, contributes heavily to the high statewide per capita GDP numbers.

Below is the state Employment Security Department’s map of county unemployment rates, demonstrating the wide variation within Washington on this key measure of economic vitality. 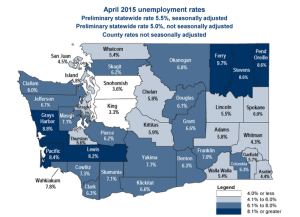 Our roadmap provides policy guidance on how to promote shared prosperity to every part of the state.