The Tax Foundation reports Washington remains an estate tax outlier: imposing the nation’s highest tax rate and one of only a handful of states still levying the tax. 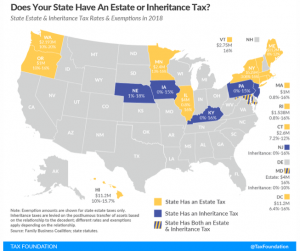 Washington state’s 20 percent rate is the highest estate tax rate in the nation; eight states and DC are next with a top rate of 16 percent. Three states match the federal exemption level of $11.2 million.

Last fall, we wrote of a Stateline article finding that most states were choosing to eliminate the estate tax.

In 2001, every U.S. state imposed either an estate or inheritance tax. But that year, the federal government eliminated its income tax credit for such payments — and the repeals began. By 2018, only 17 states will have an estate tax, an inheritance tax or both.

In recent years, Tennessee (2016), Georgia (2014), Indiana, North Carolina and Ohio (all in 2013) also have eliminated their estate or inheritance taxes.

Washington lawmakers passed an estate tax in 2005. Initiative 920, a 2006 attempt to repeal the legislation, was rejected 38-62