Stateline has analyzed job growth since the recession, finding that

Although the nation’s unemployment rate is at a seven-year low of 5.4 percent, job growth among the states has been uneven, with several showing only meager gains more than five years removed from the depths of the Great Recession.

On average, employment has increased 8 percent among all 50 states and the District of Columbia since each one’s individual nadir.

As the screenshot below shows, Washington has experienced 11.63 percent growth. 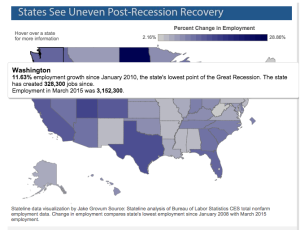 In 14 [states], employment has increased 10 percent or more since their low points.

The top performers are North Dakota, Texas and Utah. Follow the link to browse the interactive map.

In the two months since the February forecast was released, the Washington economy added 9,400 nonfarm payroll jobs, 1,200 fewer than the 10,600 increase expected in the forecast. As is usually the case, most of the jobs created in February and March were in private, service-providing sectors which added 5,900 jobs. The February forecast had expected an increase of 11,900.

While the growth in nonfarm payroll employment was somewhat disappointing in February and March, the state’s unemployment rate fell from 6.3% in January and February to 5.9% in March.

From April to May, revenue collections beat the forecast by $4.6 million. The Washington Research Council notes that,

On balance, budget writers now have about $60 million more to spend than had been expected in the February forecast.

The Pew report reminds us that seven years into an uneven and sluggish recovery, the state economy is doing better than most. It also reminds us that sustained job growth remains elusive. That’s true nationally. It’s also true within our state, as most counties continue to struggle with high unemployment rates, an issue we discussed here.