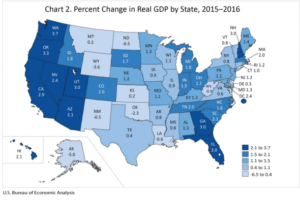 Washington’s state Gross Domestic Product (GDP) grew 3.7 percent in 2016, the fastest growth rate in the nation according to the U.S. Bureau of Economic Analysis.

Real GDP growth slowed to 1.5 percent in 2016 after increasing 2.6 percent in 2015 [nationally]. Real GDP grew in 43 states and the District of Columbia. Real GDP by state growth ranged from 3.7 percent in Washington to –6.5 percent in North Dakota . Information services; professional, scientific, and technical services; and health care and social assistance were the leading contributors to growth in 2016. [Table references deleted.]

As we’ve written before, there’s a sharp division between metro Seattle, home to many of the tech and information services jobs leading growth, and rural Washington.

Gross domestic product is the value of all goods and services within a state’s (or nation’s) borders. While hardly a comprehensive measure of well-being, it remains an economic gold standard…

The information sector was a big contributor to Washington’s growth at 1 percent, by far the biggest jump among the states.

The state’s economic growth remains strong, but too limited to the metro area. The BEA numbers are, of course, a look backward, they confirm a trend suggesting budget writers might be able to count on continued revenue growth when they get back to writing a budget.

Over the past five years, we’ve seen a fascinating connection between two high-tech cities: Seattle and the San Francisco Bay Area. Many don’t even see the bonds quite yet, since the physical connections points are not obvious.

But money, talent and ideas now flow between the two regions like water through Deception Pass. No matter how hard you try, you can’t stop the flow now.

He comments on the connections, which also suggest a divide within our state.

Given this, many in Seattle are now more connected to those in Sunnyvale than they are Sunnyside.

The article links to a related article in The Economist. Interestingly, the pairing of Silicon Valley with Seattle seems to be an extension south of the Cascadia Innovation Corridor of which we’ve written before. Washington’s innovative tech economy continues to be the envy of the world. Our challenge is to make sure the prosperity and opportunity being realized in metro Seattle extends to all corners of the state.