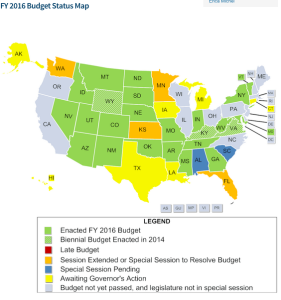 NCSL reports that 46 states begin the new fiscal year July 1. As of June 12, 24 states have enacted budgets for FY 2016, three of them via a biennial budget adopted during the 2014 legislative session.

Washington is, as we all know, among the states still struggling to reach a budget resolution.

The Tax Foundation reviews some of the key state tax actions taken this year. In some states, as in ours, budget hangups primarily concerned disagreements on tax policy. Nevada‘s passage of $1.4 billion in new and extended taxes for the biennium, including a “a new Commerce Tax on the gross receipts of businesses with at least $4 million in revenues in Nevada” will interest  critics of our B&O tax.

The Tax Foundation also weighed in on proposals in Olympia to adopt a capital gains tax. The Foundation’s Jared Walczak says,

I’ve written previously about Washington State’s budget debate, as Governor Jay Inslee (D) and his legislative allies seek to raise taxes to fund a multibillion dollar increase in state expenditures. Among the most controversial elements of the proposal is a proposal that would make Washington the only state to tax capital gains but not impose a general income tax.

He concludes by noting,

…in response to Governor Inslee’s budget, S&P noted, “We have observed that capital gains-related tax revenues are among the most cyclical and difficult to forecast revenues in numerous other states,” though in doing so, they only echoed the state’s own fiscal analysts, who previously concluded that “Capital gains are extremely volatile from year to year” and warned that “[f]orecasted amounts in this fiscal note could be greatly over or understated.”

Taking the pro-side, the Seattle Times recently endorsed a capital gains tax with iron-clad limitations as a way to break the education funding deadlock.

The Washington Research Council’s analysis of Gov. Jay Inslee’s capital gains proposal – not the same as the plans currently being discussed – remains a good primer on the tax.  The Washington Policy Center considers some other issues relevant to current discussions.

Disagreements about what taxes to raise and by how much, of course, take a back seat to disagreements about whether any tax increase at all is required. On that issue, the Senate Republicans and House Democrats remain sharply divided… at least in their public comments.