After uneven growth last year, Washington posted the nation’s highest increase in gross domestic product in the first quarter, according to the federal Bureau of Economic Analysis.

The report today said Washington GDP grew by a seasonally adjusted 3.9 percent, tied with Oregon and Arkansas for the lead. Nationally, the broadest measure of goods and services increased 1.1 percent. The state’s GDP increased by 1.3 percent in the fourth quarter of last year.

The map below is from the BEA report. 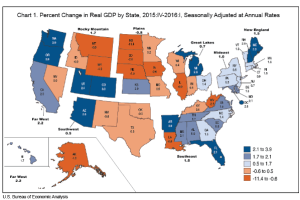 The Puget Sound Business Journal reviews the report and makes this observation:

The Puget Sound-area technology industry is booming, but the region and state overall still face challenges to growth and competitiveness, including education and transportation infrastructure. Joseph Williams, the former Microsoft executive who was recently appointed to advise Washington Gov. Jay Inslee on technology policy, revealed in a recent interview how the state is approaching some of the industry’s challenges.

Washington’s information sector – which typically encompasses information and communications technology – accounted for nearly one-fourth, or .94 percent, of the state’s GDP growth. The state’s real estate sector GDP grew .92 percent, according to the report, while both the construction and retail industries’ GDP grew about .6 percent.

These are issues that we have written about extensively, citing concern that too many counties in the state continue to struggle with high unemployment. As the PSBJ points out, education and transportation infrastructure are critical issues, representing our Achieve and Connect priorities.

The robust growth in the state makes possible the improvements in education and transportation that will help us all realize the Opportunity Washington goal of shared prosperity in all corners of the state.