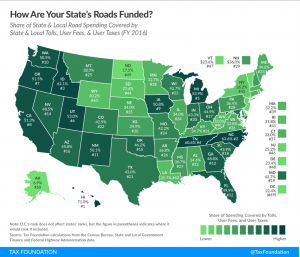 States vary widely in how they handle roads funding. And Washington ranks among the highest – No. 10 – in reliance on gas taxes and user fees.

The Tax Foundation has examined the data, producing an interesting interstate comparison, shown in the map above. TF analyst Janelle Cammenga writes,

Gas taxes are largely used to fund infrastructure maintenance and new projects, but the amount of state and local road spending covered by gas taxes, tolls, user fees, and user taxes varies widely among states. It ranges from only 6.9 percent in Alaska to 71 percent in Hawaii. In the contiguous 48 states, North Carolina relies the most on dedicated transportation revenues (63.6 percent), while North Dakota relies on them the least (17.5 percent). States like Alaska and North Dakota keep their transportation taxes low in the same way that they keep all taxes on state residents low—by exporting taxes, primarily through the severance tax.

For states like ours, with limited ability to export the tax load, the options are clear:

Though politically unpopular, gas taxes, fees, and tolls are all relatively good applications of the benefit principle—the idea that the people paying the taxes and fees should be the ones to benefit from them. However, federal and most state gas taxes are not indexed for inflation. This means that, as time goes on and inflation rises, the real value of the gas tax decreases even as the nominal rate remains the same, leaving states with budget shortfalls and gaps in infrastructure funding. States should seek to fund infrastructure through user taxes and fees as much as possible, internalizing the costs associated with using the state’s transportation systems.

A fast-growing, economically vibrant state like Washington struggles to maintain the transportation infrastructure required to serve commerce and families. As our Connect priority states:

Everyone depends on the transportation system, from farmers and manufacturers to individuals and families. It’s time to invest in transportation to support a prosperous future.

In 2015, the Legislature passed the $16 billion Connecting Washington celebrated by business leaders. Major parts of that breakthrough legislation would be undone were Initiative 976 to pass in November. From our earlier blog post.

A fall ballot measure to cut car-tab costs across Washington state would blow a $4 billion hole in local and state transportation funding over the next six years, a new report says.

There’s much at stake in November.