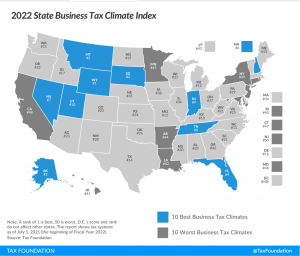 The Tax Foundation has released the 2022 version of the State Business Climate Index. Washington comes in at No. 15, down one rung from last year. Washington doesn’t move much on the index, ranking between No. 13 and No. 17 since 2014.

The methodology also doesn’t change much from year-to-year. The Tax Foundation gets high marks from us on transparency. Here’s a key section of their methodological discussion.

Why the index? TF explains in the introduction to the report.

Taxation is inevitable, but the specifics of a state’s tax structure matter greatly. The measure of total taxes paid is relevant, but other elements of a state tax system can
also enhance or harm the competitiveness of a state’s business environment. The State Business Tax Climate Index distills many complex considerations to an easy-to-understand ranking.

The modern market is characterized by mobile capital and labor, with all types of businesses, small and large, tending to locate where they have the greatest competitive advantage. The evidence shows that states with the best tax systems will be the most competitive at attracting new businesses and most effective at generating economic and employment growth. It is true that taxes are but one factor in business decision-making. Other concerns also matter—such as access to raw materials or infrastructure or a skilled labor pool—but a simple, sensible tax system can positively impact business operations with regard to these resources. Furthermore, unlike changes to a state’s health-care, transportation, or education systems, which can take decades to implement, changes to the tax code can quickly improve a state’s business climate.

It is important to remember that even in our global economy, states’ stiffest competition often comes from other states. The Department of Labor reports that most mass job relocations are from one U.S. state to another rather than to a foreign location.

Much more in the report.

And, moving on, with an acknowledgment to Washington Policy Center analyst Jason Mercier who flagged to the report, we have Tax Foundation analyst Jared Walczak’s analysis of the Washington capital gains tax. Walczak is a co-author the the State Business Tax Climate Index. We recommend his commentary, which focuses on the distinction between an excise tax and an income tax. The state claims the new now-in-court tax is the former. Nearly everyone else recognizes that its an unconstitutional income tax. (We added that “nearly” because, well, there may be some dissenters.) Here’s Walczak’s conclusion.

Of course, it is an income tax. Let’s go back to that distinction between an indirect tax on things made, sold, or used—or, put another way, on activities and transactions—and a direct tax, which would be on an individual’s earnings or possessions. It’s possible to impose an excise tax on the activities surrounding capital gains—bad policy, but possible. If Washington had chosen to levy a tax on sales of stocks or bonds, such a stock transfer tax would be an excise tax, because it’s based on the transaction or activity. Washington’s tax, however, is not based on the number of transactions, or on any activity, but on the net capital gains income earned over the course of the year. The object of the tax is clearly the person, with a focus on their aggregate income. It is a direct tax. It is literally denominated in income. It is, in short, an income tax.

And in Washington, that should be an end to it.