Washington slips from No. 5 to No. 6 in the 2018 Milken Institute State Technology and Science Index. The top 10 state, shown below, contain few surprises. 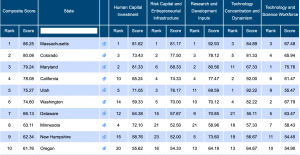 About Washington, the Milken analysts write,

Washington drops one rank to sixth in the 2018 STSI. Washington scores 74.6 points, an increase of 2.76 points from last year, and improves its placement on four of the five sub-indexes. The exception is the RDI, where the state drops to tenth, a three-rank drop from the last STSI release. Washington increases its RCI rank by ten places going from No. 15 to No. 5. The state’s improved performance on the RCI comes from a higher rate of business starts and more success attracting venture capital deals to fund the nanotech and clean tech sectors. Washington climbs from eighth to fourth on the TCD, and also improves its performance on the TSW, rising from fifth to second for this edition of the STSI. Washington saw a modest improvement in its rank on the HCI, up to No. 14 from No. 16.

Washington State has a competitive life science sector, reflected by its $15.87 in VC investment in biotech per $100,000 of GSP (No. 6). In 2017, Frazier Healthcare Partners, which has headquarters in the state, raised $419 million in life-science-focused investments.19 The increase in high-tech funds for Washington is further reflected by venture capitalists like Madrona Venture Group launching in 2018 with a new fund of $300 million.20 However, the growth of ecommerce and cloud computing— major contributors to the size of the state’s high-tech sector—is largely driven by established firms like Microsoft and Amazon. The state ranks No. 1 for both the share of private sector wages and employment in the high-tech sector. Washington has nearly 20 percent of total state wages in the high-tech industry.

This is a big take-away from the Milken Institute’s new State Technology and Science Index, a gold-standard report that comes out every two years.

In the new assessment, released today, Washington fell among the ranks of the top 10 states. Not far — one notch, to No. 6. But benchmarks matter and we should never take our luck and pluck for granted.

Utah lacks any Fortune 500 headquarters (Washington boasts 16). But to use boxing parlance, the Beehive State might be an up-and-coming “swarmer,” with strong attributes in R&D, startups, human capital and tech concentration.

This is only one assessment, of course, even if an important one.

The benchmarks are useful. We’d add some insight from the report on the importance of postsecondary education and workforce experience.

For many, the promise of college is higher-paying employment. The scale of high-tech employment ranges from Washington State with the largest percentage (10.49), to Wyoming, with the lowest percentage (2.27). In the U.S. as a whole, the high-tech sector represents 10.47 percent of total wages all while only making up 6.01 percent of total employment (see Figure 15). In 2016, the high-tech industry made up only 5.62 percent of total U.S. establishments, but these had outsized economic influence per their proportion of the overall economy, representing 11.62 percent of real GDP. These indicators show a high wage premium, a relatively small percentage of employment opportunities, and a small set of companies with enormous impact on the overall economy. However, the transition from college student to the workforce is not a straightforward process for everyone. Having beyond a bachelor’s degree can help smooth the transition, but there is no doubt that relevant work experience can jump-start a career for new graduates. Three of the main channels utilized during a college career that can assist with the transition are career services, internships, and co-op education programs.

We’re always a bit skeptical of these state rankings, even good ones like the Milken Index, but the information contained here is useful for policymakers. It’s worth your time.