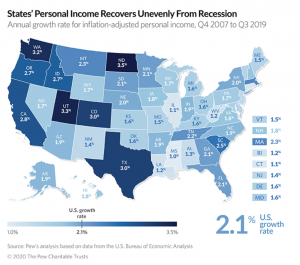 Another report confirms that Washington has enjoyed a remarkably strong economy coming out of the recession a decade ago. This isn’t news, we acknowledge, but the story merits our attention. Pew reports,

The constant annual growth rate for each state’s aggregate, inflation-adjusted personal income since the fourth quarter of 2007 (when the 2007-09 recession began) to the third quarter of 2019 shows:

The report clarifies what’s being measured.

Personal income sums up residents’ paychecks, Social Security benefits, employers’ contributions to retirement plans and health insurance, income from rent and other property, and benefits from public assistance programs such as Medicare and Medicaid, among other items. Personal income excludes capital gains…

Washington also saw strong PI growth in the past year.

So this Seattle Times story by Paul Roberts caught our attention.

It’s the kind of statistic that gets attention in a fast-growing region like the Seattle area: On Wednesday, the U.S. Bureau of Labor Statistics (BLS) reported that average wages and salaries in the area grew only about half as fast as the nation as a whole last year.

Scott Bailey, a regional economist with the state Employment Security Department, says he and other state economists have been watching the BLS data closely over the last year, but haven’t seen a similar decline in either the state’s own jobs data or in other federal data related to the job market in the Seattle area.

To the contrary, state data shows that the average wage in the Seattle area — which the BLS defines as King, Snohomish, Pierce, Island, Kitsap, Lewis, Mason, Skagit, Snohomish and Thurston counties — was $81,564 in the third quarter of 2019, the latest period available, or 7.6% higher than the same quarter in 2018, Bailey said.

Plus, the region added lots of jobs in high-wage sectors, such as software and information services, which would tend to push up wages, Bailey said. He suggested that the BLS data “should be viewed with caution.”

The BLS numbers “just don’t jibe” with the region’s tight labor market, he said, or with what he is hearing from local employers, many of which have spent the last several months facing workers who are saying “give me a pay raise or I’m going somewhere else.”