Washington comes in at No. 19 on the Tax Foundation’s  2020 State Business Tax Climate Index released today. The top 10 states are

This does not mean, however, that a state cannot rank in the top 10 while still levying all the major taxes. Indiana and Utah, for example, levy all of the major tax types, but do so with low rates on broad bases. 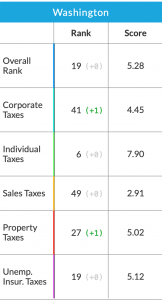 Our post last year showed Washington at No. 20. The Tax Foundation shows our No. 19 ranking as unchanged from last year, explaining it this way in an email.

When we update our methodology, we backcast them for comparability’s sake, so that changes are based on actual policy divergences, not methodological tinkering from year to year. This year, we expanded the Index to capture more about states’ responses to Wayfair, the TCJA, etc., among other changes.

The TF index is a useful tool for assessing the competitive strengths and weaknesses of a state’s tax structure. The analysts explain why this is important.

The modern market is characterized by mobile capital and labor, with all types of businesses, small and large, tending to locate where they have the greatest competitive advantage. The evidence shows that states with the best tax systems will be the most competitive at attracting new businesses and most effective at generating economic and employment growth. It is true that taxes are but one factor in business decision-making. Other concerns also matter–such as access to raw materials or infrastructure or a skilled labor pool–but a simple, sensible tax system can positively impact business operations with regard to these resources. Furthermore, unlike changes to a state’s health-care, transportation, or education systems, which can take decades to implement, changes to the tax code can quickly improve a state’s business climate.

It is important to remember that even in our global economy, states’ stiffest competition often comes from other states. The Department of Labor reports that most mass job relocations are from one U.S. state to another rather than to a foreign location.[13] Certainly, job creation is rapid overseas, as previously underdeveloped nations enter the world economy, though in the aftermath of federal tax reform, U.S. businesses no longer face the third-highest corporate tax rate in the world, but rather one in line with averages for industrialized nations.[14] State lawmakers are right to be concerned about how their states rank in the global competition for jobs and capital, but they need to be more concerned with companies moving from Detroit, Michigan, to Dayton, Ohio, than from Detroit to New Delhi, India. This means that state lawmakers must be aware of how their states’ business climates match up against their immediate neighbors and to other regional competitor states.