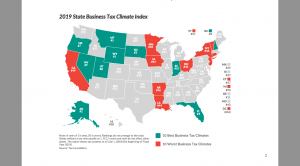 Washington ranks 20th among the 50 states in the 2019 State Business Tax Climate Index (SBTCI) published by the Tax Foundation. The annual report is a frequently cited and useful benchmark on state tax policies as they affect business. Here’s how TF describes the index:

The Tax Foundation’s State Business Tax Climate Index enables business leaders, government policymakers, and taxpayers to gauge how their states’ tax systems compare. While there are many ways to show how much is collected in taxes by state governments, the Index is designed to show how well states structure their tax systems and provides a road map for improvement.

Washington’s ranking, down from No. 17 in 2018 and 2017, is also cited as being at risk. In a suggested Tweet on the Washington page in the Index, the authors note:

Washington ranks #20 on business tax climate per the @taxfoundation, but that rank could be in jeopardy as state policymakers contemplate a bevy of new and higher taxes

Among the strengths of the state tax structure in the TF calculations is the absence of a personal income tax. The Tax Foundation, however, also notes that the Washington B&O tax has elements of an income tax for certain business types.

As a zero rate is the lowest possible rate and the most neutral base, since it creates the most favorable tax climate for economic growth, those states with a zero rate on individual income,corporate income, or sales gain an immense competitive advantage. Therefore, states without a given tax generally receive a 10, and the Index measures all the other states against each other.

Three notable exceptions to this rule exist. The first is in Washington and Texas, which do not have taxes on wage income but do apply their gross receipts taxes to limited liability corporations (LLCs) and S corporations. Because these entities are generally taxed through the individual code,these two states do not score perfectly in the individual income tax component.

We have commented previously on the Tax Foundation SBTCI, providing our standard caveat.

As usual, we’ll provide the caution that opinions will vary regarding the weightings, measures, etc., of any index. But we’ll add that the Tax Foundation does good, objective analysis and that the information provided here will be useful to policymakers and others interested in understanding state tax systems and their effects on business.