Although this falls under the heading “more confirmation than new information,” it’s nonetheless instructive. Washington takes third place in the 2017 State New Economy Index published by the Information Technology and Innovation Foundation. Our state is accustomed to ranking near the top in interstate comparisons of tech leadership, including this one.

There has been little movement among the top states since ITIF published the 2014 edition of the Index. Massachusetts continues to occupy first place, as it has in the previous seven editions. California and Washington both have moved up one position from 2014 to second and third place, respectively.

Washington State, in third place, ranks in the top five not only because of its strength in software and aviation exports, but also because of the entrepreneurial activity that has developed in the Puget Sound region and the widespread use of digital technologies by all sectors.

ITIF provides a clear explanation of its methodology, including the weighting of the various factors considered. 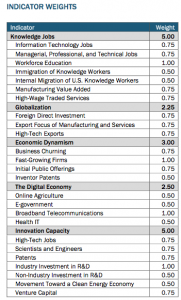 [The ranking] matters in an era where five tech giants stand astride the economy — and two of them are headquartered in the Seattle area. IT jobs increased by 35 percent between 2006 and 2016, while overall private-sector employment grew only 6 percent. The report also notes that strong IT-enabled service exports contributed to the 20 percent expansion in services exports from 2011 to 2016.

His comment also underscores the degree to which these interstate comparisons are often comparisons between and among metro centers. That’s an element of the urban-rural divide we’ve commented on in the past. This week we’re asking you to share your views on the divide with us in a brief survey.

ITIF makes an important observation about the elements contributing to “new economy” success.

To be well positioned to take advantage of technological innovation and thrive amid the ebbs and flows of the global economy, states need to be firmly grounded in what we and others have called “New Economy” success factors. This report assembles an index of 25 indicators across five economic categories to assess states’ fundamental capacities to successfully navigate an economy driven by technological innovation. It measures the degree to which state economies are knowledge- based, globalized, entrepreneurial, IT-driven, and innovation-based.

The success factors are neither urban nor rural; they apply broadly and resonate comfortably with the Opportunity Washington priorities. We recommend the ITIF report to your consideration.