California remains the number one place for venture capital activity with $8.9 billion invested in the state during the fourth quarter, according to the MoneyTree report released this month by CB Insights and PwC. In fact, the San Francisco region saw a whopping $5.1 billion invested into startups, a 23 percent increase in dollars invested. Nearby Silicon Valley — home to tech giants like Apple and Google and venture capital powerhouses like Benchmark and Andreessen Horowitz — saw investment totals increase to $2.6 billion, up 18 percent.

Washington, while still in the top ten, has slipped.

The MoneyTree report includes the following chart, which demonstrates just how dramatic the falloff is from CA and the rest of the nation. Even 2nd and 3rd ranking New York and Massachusetts are far behind the Golden State (when it comes to VC, the old nickname seems apt). 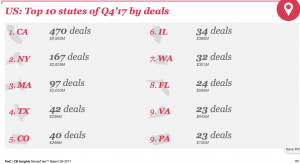 Venture capital is often included in rankings of state business climate, in recognition of the importance of access to capital to new and expanding businesses. For example, CNBC, in ranking Washington the nation’s top state for business in a July 2017 report, wrote,

With the nation’s fastest-growing economy and an all-star business roster of household names and up-and-comers, Washington — the Evergreen State — soars above the competition as America’s Top State for Business in 2017.

The home of Amazon and Costco, Boeing and Expedia, as well as rising stars like Adaptive Biotechnologies, online marketplace OfferUp and space company Blue Origin, Washington has the old and new economies covered — as well as pretty much everything in between.

But the success story does not end there. At a time when the best workforce rules, Washington boasts the nation’s largest concentration of STEM (science, technology, education and math) workers. Nearly 1 in every 10 Washington workers is in those professions, according to the U.S. Bureau of Labor Statistics. The University of Washington’s computer science school — recently named for one of the state’s most famous natives, Microsoft co-founder Paul Allen — is world class. There is no brain drain here; no state does better at hanging on to its college graduates. And the state is consistently a magnet for investment capital. Washington businesses attracted nearly $1.6 billion in venture capital last year, the sixth-highest total in the nation. (Emphasis added)

The MoneyTree report is worth a look.