The Washington Research Council has published a new policy brief, “Washington Spending Review: Spending Up 44 Percent Since Pre-Recession Peak,” providing a useful context for evaluating the governor’s budget proposal, which we expect soon. The WRC report complements its earlier analysis of revenue trends.

Washington’s state and local spending increased dramatically coming out of theGreat Recession as the state invested primarily in education to address the McCleary education funding lawsuit. With McCleary now in the rear-view mirror, there appears to be an enormous appetite among legislators for new spending on almost everythingelse. As the spending proposals begin to roll out with the governor’s budget, it is instructive to look at the state’s recent spending history.

From the pre-recession peak in 2008 through 2019, spending from funds subject to the outlook (NGFO) is budgeted to increase 43.9 percent. Washington’s state and local spending per capita has exceeded the national average in most years since 2000 and ranked 15th highest in 2016. From 2016 through 2021 (the end of the second biennium of the current four-year budget window), NGFO spending is projected to increase by 40.3 percent.

Washington increased spending more than most states as it emerged from the recession. 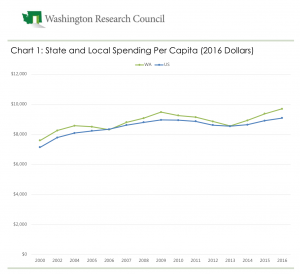 A lot of the recent growth, as you might expect, is associated with McCleary school funding compliance, ordered by the state Supreme Court.

Growth in state spending on public schools started to increase faster than other areas in 2014, which marked the beginning of the state funding increases related to the McCleary decision. From 2008 to 2019, total NGFO spending is budgeted to increase by 43.9 percent. Over that time period, NGFO spending on public schools is budgeted to in- crease by 88.8 percent. [Note: NGFO is “near general fund-outlook,” the current term for what most of us consider the state budget. The WRC explains in more detail in the brief.]

We recommend the 6-page brief to your consideration. An important takeaway from the conclusion:

The spending story of the decade hasbeen the state’s response to theMcCleary decision. The related increases in state spending began in 2013–15, but the full impact of the school funding increases won’t be felt until the upcoming 2019–21 biennium. Still, the effort appears to be showing up in the national data: Washington’s state and locals pending per capita was about the same as the national average in 2013, after which Washington’s spending started to outpace the nation.

Legislators will face pressure in the coming session to increase spending for budget areas that have taken a backseat during the McCleary spending ramp-up.

…The recent revenue forecast will tempt legislators too. But an economic downturn looms sometime in the future. After so many years of strong revenues and the spending to match, a cautious approach is warranted.

While caution is nearly always a good idea in fiscal policy, as the WRC points out, it’s particularly important in the coming biennium.