The improved revenue forecast released earlier this weeks, a caseload forecast that reduces anticipated spending, and savings resulting from executive action taken by the governor have brought the state budget four-year outlook into the black, according to a Washington Research Council analysis. It’s quite a turnaround from the bleak scenario anticipated in June.

As part of the November revenue forecast, the ERFC updated the 2019–21 balance sheet. With the increase in the revenue forecast since September and a higher level of reversions (appropriations not spent), the unrestricted ending balance for 2019–21 is now estimated to be negative $152 million. That can easily be covered by the rainy day fund (the budget stabilization account, or BSA), which is expected to have $1.943 billion. Total reserves for the biennium are expected to be $1.791 billion.

She presents two balance sheets (click through to see Tables 1 and 2).

Table 1 shows the ERFC balance sheet for 2019–21, and my estimate of the outlook for 2021–23. My estimate is based on the June unofficial outlook from the Office of Program Research, updated to account for the new revenue forecast and new reversion estimate (with no other spending adjustments). Under this scenario, total reserves over four years are negative $12 million.

We think Table 2 is most likely very close to what the state can anticipate.

Table 2 adjusts the outlook to incorporate the November caseload forecast and other estimated budget savings. Previously, I had incorporated an estimate of the governor’s savings measures ($200 million in 2019–21) and an estimate of how much the state would save due to the enhanced federal Medicaid match ($786 million if in effect through FY 2021). Some amount of these savings is now accounted for in the reversions figure. (I have adjusted my estimate accordingly.) In this scenario, assuming the Legislature taps the rainy day fund, total reserves in 2021–23 are $1.149 billion.

That’s astonishingly good news for state taxpayers and for those who depend on state spending. Tax increases some lawmakers had been contemplating imposing on businesses and households coming out of a recession won’t be required. Remember, the revenue recovery doesn’t mean the economy is healed; it’s because programs like unemployment insurance and the federal pandemic relief packages worked to sustain consumption and bolster savings.

In another post on state revenues, Makings writes that Washington has fared better than other states.

Lucy Dadayan of the Urban Institute reports that Washington is one of 12 states in which state tax revenues from March to September 2020 increased over the same period in 2019. The Wall Street Journal adds,

Sales tax revenue in most states hasn’t fallen as much as expected because many Americans haven’t reduced spending. They are spending on different things. They are buying more appliances to remodel their homes while spending less on personal services like hair cuts and dry-cleaning, which most states don’t tax.

While the state will collect less revenue than anticipated in February, revenues have continued to grow during the recession.

The changes in forecast are clear in this WRC graph. 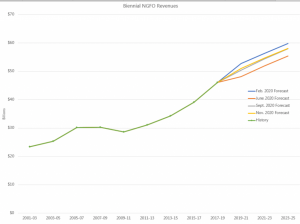 For now, we can retire references to a state budget crisis.