The Washington Research Council has published an analysis of the House Democrats’ budget proposal released Monday. The WRC concludes,

Estimated revenues for 2019–21 are $50.555 billion—just more than the $50.496 billion maintenance level (and that’s not including the $1.690 billion beginning balance). That high maintenance level is the result of policy choices made by the Legislature last year. The House Appropriation Committee Chair’s budget proposal would add $2.316 billion on top.

On the way to that conclusion, there’s a lot of detail. The proposed spending increase comes on top of 44 percent budget growth in the last decade. The following chart from the WRC policy brief shows the trend. 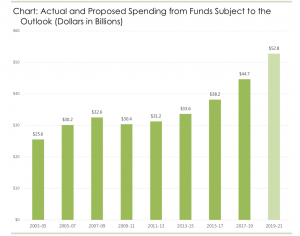 In a separate report, the WRC provides a categorical breakdown of how the House proposal would spend the money.

Although there has been extraordinary revenue growth since lawmakers adopted their supplemental budget last year, funding the proposed budget relies on – requires – new taxes.

Despite $5.6 billion in new revenue growth since the supplemental budget was adopted last March, the Chair proposes a significant tax package to help fund new policies. Included in the package is a capital gains tax. As proposed, the budget would balance over four years. However, that balance depends on capital gains tax collections. In the event of a legal challenge (which could take years to resolve), it is unlikely the state would collect capital gains revenues in 2019–21. This would put the budget out of balance in 2019–21, even if there is no economic downturn. With many economists indicating that a downturn is somewhere on the horizon (perhaps within the four-year balanced budget timeframe), legislative leaders would be wise to consider the sustainability of such historic spending increases.

Today’s report that  economic growth slowed to an annualized rate of 2.2 percent in Q4 2018 adds some urgency to the WRC’s call for caution.