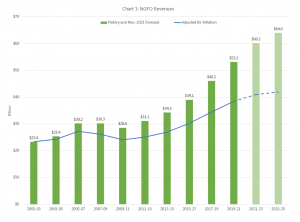 Although we’ve previously written about the nearly $2 billion boost in the state revenue forecast, we want to call your attention to some additional analysis from the Washington Research Council. Emily Makings, WRC senior analyst, puts the revenue growth in perspective in four charts available here. We included one of them at the top of this post.

Under the current forecast, through 2023–25, NGFO revenues are estimated to be $8.562 billion higher than in the March 2021 forecast (the forecast on which the current budget is based). Of course, the Legislature made some changes to taxes during the session, most notably imposing a capital gains tax. Removing those legislative changes from the revenue increase, the state has $7.356 billion more than expected at the end of session. That’s a substantial amount. The increase for 2021–23 is 5.4% of estimated biennial revenues and the increase for 2023–25 is 5.2% of biennial revenues.

Because everyone is interested in the capital gains tax, she cites this from the forecast:

Probably not the only behavioral effect we can expect to see.