Property taxes in Washington provide 28% of all state and local tax collections here, ranking the state 29th in property tax reliance, according to the Tax Foundation. 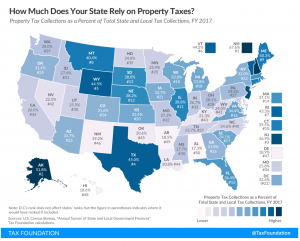 The variation among the states is considerable.

New Hampshire and Alaska relied most heavily on property taxes, which respectively accounted for 67.6 percent and 51.8 percent of their tax collections in FY 2017. Alabama and Arkansas landed at the other end of the spectrum, raising the smallest portion of their state and local tax revenue through property taxes: 17.3 percent and 18.5 percent, respectively.

Property taxes, while always a sensitive topic in political discussions, are a highly stable revenue source for state and local governments.