Washington voters remained consistent on the two fiscal measures on yesterday’s ballot. They again rejected a carbon fee, just as they did in 2016 when I-732 was defeated. And they supported a measure to prevent local governments from imposing taxes on food and beverages, in a vote reminiscent of the 2010 support for I-1107 repealing food and beverage taxes imposed by the Legislature that year.

Two maps produced by the Seattle Times show a familiar voting pattern, with King County providing the bulk of the votes for the carbon fee and against the preemption measure. 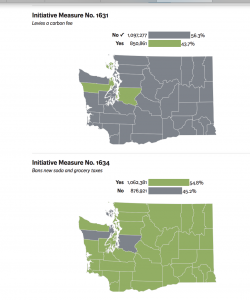 The I-1631 carbon fee measure would have made Washington the first state in the nation to adopt a carbon pricing mechanism. As such, it garnered national attention. The Seattle Times reports,

As of Tuesday evening, with more than 1.9 million votes tallied from all 39 counties, 56.3 percent of the voters opposed the initiative, while 43.7 percent supported the measure. There are many more votes to be counted but the lead was unlikely to be overtaken.

That’s just slightly more support than the 41 percent backing for I-732. As Governing magazine reports, this year’s measure had more support from environmental and labor groups than did the 2015 initiative.

Unlike previous attempts to impose a carbon tax, this year’s effort was supported by a wide range of environmental groups, including the Nature Conservancy, Sierra Club, Audobon Society and Earthjustice. Several unions, the American Lung Association, Planned Parenthood, Native American tribes, Microsoft, REI and Expedia were also on board.

Geek Wire has analysis of the campaigns for and against the initiative. As the Seattle Times reports, supporters of the carbon tax are already considering their next steps.

Proponents, however, said that the battle to put a price on Washington’s fossil fuel emissions is not over. They already are thinking ahead to getting a bill passed next year in Olympia “where we know we have legislative champions who are prepared to keep pushing on this issue,” said Mike Stevens, state director of the Nature Conservancy, a major backer of I-1631.

I-1634 would not reverse Seattle’s 1.75-cents-per-ounce sweetened-beverage tax, but it would prevent further increases and stop other cities from following suit. In Tuesday’s results, voters in King County were opposing I-1634 by more than a 10-point margin, and it was failing in Jefferson and San Juan counties. But it was approved by large margins throughout the rest of the state.

As Jim Camden writes in the Spokesman-Review,

I-1634 could best be described as a prophylactic measure. It will prevent other local governments from levying taxes like the Seattle soda tax, although none are currently on the horizon and it does not repeal the Seattle measure…

The campaign had no contributions from individual Washington residents, but enjoyed support from many of the state’s business groups.

Votes are still being counted. We’ll have more on the election later.