The following map from the Tax Foundation may be surprising, both in terms of the number of states that levy neither estate nor inheritance taxes and for the state with the top estate tax rate. 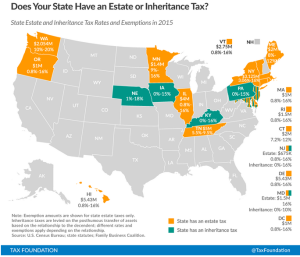 The state with the highest maximum estate tax rate is Washington (20 percent), followed by eleven states which have a maximum rate of 16 percent. Hawaii and Delaware have the highest exemption threshold at $5,430,000 (matching the federal exemption). New Jersey has the lowest, only exempting estates up to $675,000.

Of the six states with inheritance taxes, Nebraska has the highest top rate at 18 percent. Kentucky and New Jersey are close behind with top rates of 16 percent.

Some details of the Washington estate tax can be found here and here. The state estate tax came about in 2005 after changes in federal law eliminated the credit for state estate taxes. An attempt to repeal it in 2006, Initiative 920, was defeated. A 2006 Washington Research Council policy brief examines some of the history of the tax.