Washington depends heavily on sales taxes. This is no surprise, but it’s still useful to have a context for evaluating the sales tax burden. 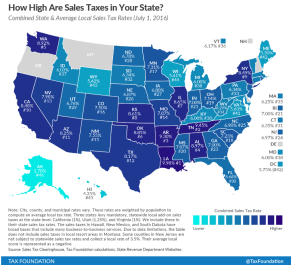 Here’s how the states compare:

Of the five states with the highest combined rate, two – Washington and Tennessee – do not have a state income tax.

Looking solely at the state sales tax rate, it may come as a surprise that Washington doesn’t crack the top five.

The Tax Foundation points out that this ranking only considers sales tax rates, not bases. The distinction is important:

This report ranks states based on tax rates and does not account for differences in tax bases (e.g., the structure of sales taxes, defining what is taxable and non-taxable). States can vary greatly in this regard. For instance, most states exempt groceries from the sales tax, others tax groceries at a limited rate, and still others tax groceries at the same rate as all other products. Some states exempt clothing or tax it at a reduced rate.

Tax experts generally recommend that sales taxes apply to all final retail sales of goods and services but not intermediate business-to-business transactions in the production chain. These recommendations would result in a tax system that is not only broad-based but also “right-sized,” applying once and only once to each product the market produces. Despite agreement in theory, the application of most state sales taxes is far from this ideal.

We add that the exemption of “intermediate business-to-business transactions” recommended by tax experts is often lumped into legislative discussions of tax incentives. The exemptions, like the sales tax exemption for machinery and equipment (there are others) is not a tax preference or incentive. It’s just smart tax policy.