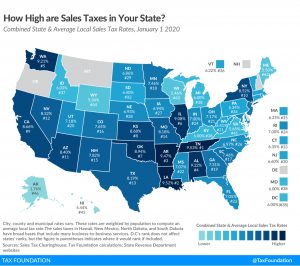 Washingtonians know that sales taxes are high here. We don’t have an income tax and most voters don’t want one. It comes almost as a surprise to find that the sales tax here, according to the Tax Foundation, ranks only fifth in the nation.

We also don’t crack the top 5 for local rates.

It’s the combination that puts us fifth.

The Tax Foundation finds some nice things to say about sales taxes.