Next week begins a legislative session poised to confront significant budget challenges (see here, here, and here). Washington’s not alone, of course. Other state legislatures will also be writing budgets this year, raising a question about relative fiscal health. How does Washington compare?

Emily Makings with the Washington Research Council reviews a pair of fiscal reports that provide answers to the question.

The second paper is the Volcker Alliance’s “Truth and Integrity in State Budgeting.” It “grades states’ success in pursuing transparent and fiscally sustainable procedures as they estimate their revenues and expenditures and attempt to keep them in balance.”

We recommend her brief post to those concerned about relative fiscal strengths and concerns. She also examines recent budget maneuvers and their effects on reserves.

One aspect of state budgeting that often gets short shrift is states’ reliance on federal funding. The Tax Foundation has produced a map and blog post that helps put federal funds in perspective. 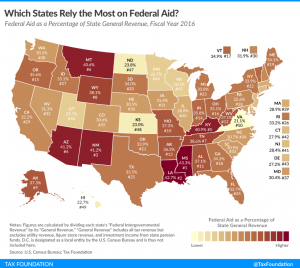 We bring this up as further evidence of the role fiscal federalism plays in state-local tax and spending policy. A WRC report released last year lays out the concept (we discussed it here). An excerpt:

Further buttressing the importance of fiscal federalism (and mitigating criticisms of Washington’s tax structure) is this.

With respect the observation made by Matthews that “redistributionist” policies are better handled on the spending side than through taxes, we previously wrote that Washington looks pretty good on that score. We cited a Governing magazine article that stated,

In 2014, the nonprofit Federal Funds Information for States (FFIS) warned that fairness is just one feature of a good tax system. Others are adequacy, simplicity, transparency and ease of administration. For example, FFIS pointed out that while Washington ranks poorly in tax fairness, it puts more of its revenues toward programs that support low-income families.

“Sometimes the policies that satisfy one feature run contrary to another, making it important that a system be evaluated in its entirety rather than in a piecemeal fashion,” the group said. (Emphasis added.)

Revenues generated by the progressive federal income tax, then, are (in part) distributed to states to provide assistance to lower income households and individuals. That more of it goes to states with higher concentrations of people living in poverty is a further demonstration that the system is working as theory intends.