“After several years of lackluster growth for the life science industry in Washington, we’re excited to have cultivated such strong progress across the state,” said Leslie Alexandre, President and CEO of Life Science Washington. “Building a life science company takes years, but we are now seeing many of our young, research-oriented companies thriving and expanding by adding manufacturing and commercial operations.”

While concentrated in the Seattle metro area, the industry has a solid statewide presence, as the following table from the economic impact report shows. 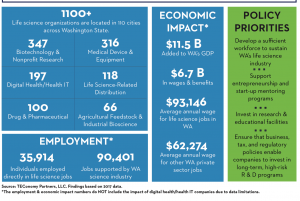 Across the state, according to the most recent data from 2017, 35,914 individuals are employed in life science jobs. While growth has been strong across the entire industry, employment in the medical device industry, a subsector of life sciences, increased by 14.2 percent in the last two years from 2015-2017.

Another growth driver is the convergence of life science and computing, which has led to the rise of companies like Adaptive Biotechnologies.

The stakes for continued success are large. The average life-science employee in Washington made $93,146 in 2017, according to Life Science Washington. And, significantly, life-science firms are far less “bro” than is traditional tech: according to the trade group, half the state’s life-science workforce is female.

Still, while the local tech realm is second only to the San Francisco Bay Area, the life-science sector here is a distant seventh behind national leader Boston, according to JLL’s survey. Other regions ahead of Seattle: the San Francisco area, San Diego, Raleigh-Durham, Philadelphia and the Washington, D.C., area.

A distant seventh means Seattle is still well ahead of most other metros in the country. And, notes ST reporter Paul Roberts, there are cluster effects – size and scale – that promote growth and investment in the stabled centers like Boston. Another factor:

Another difference between Seattle and the cities it hopes to rival: where life-science firms in places like Boston have benefited from strong government support, in the form of everything from tax credits for research and development to direct support for biotech-manufacturing capacity, firms in Washington now get far less direct public support.

That wasn’t always the case: in 2005, state lawmakers created the Life Science Discovery Fund, funded with money from the tobacco settlement, which helped support some 40 startups, including Adaptive Biotechnologies, and was credited with helping add 3,500 jobs. But in 2015, the program lost support in the Legislature and, after years of dwindling budgets, was defunded in 2015.

Alexandre, Gray, and other industry officials are part of an effort to lobby state lawmakers to resume support. But they’re also working to address the sector’s bigger need — a chronic labor shortage — by coordinating with regional universities and community colleges to start expanding the local talent pool.

For background see our earlier posts on links between life sciences and IT, a Washington Research Council economic impact analysis of the sector from 2007-2011, and a 2016 Washington Business article on Washington’s tech transformation.

The industry’s return to a solid growth trajectory is good news for the state economy.