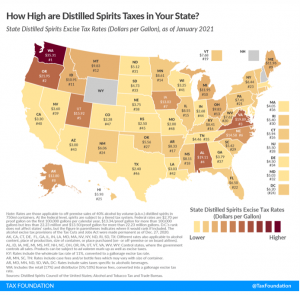 We generally take note of rankings that put Washington in the top tier, and it doesn’t get more top tier than No. 1. The Tax Foundation has released a national ranking of liquor taxes, which finds Washington in first place.

Data for this map comes from the Distilled Spirits Council of the United States (DISCUS). To allow for comparability across states, DISCUS uses a methodology that calculates implied excise tax rates in those states with government monopoly sales.