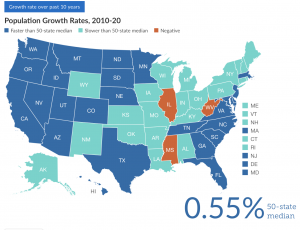 Pew’s Fiscal Fifty takes a look at state population growth as reported by the U.S. Census. As most would expect, Washington performed well over the decade. As the map above, from Pew, shows, states in the West and Southeast generally grew faster than the 50-state median.

Here’s the snapshot; up a million.

As Pew points out, growth – generally – is good.

A shrinking or slow-growing populace can be both a cause and an effect of weakened economic prospects. The states with long-term population declines all fell near the bottom of economic growth over the 12-year recovery from the Great Recession. Less economic activity can limit state revenue collections. Though a smaller population can lead to a reduction in some types of spending, it also means there are fewer residents to help cover the costs of long-standing commitments, such as debt and state employee retirement benefits.

A couple of highlights.

A comparison of 10-year population trends, based on each state’s constant annual growth rate between April 2010 and April 2020, shows:

We look forward to further analysis of the Census data.