Stateline examines per capita income data to compare states economic performance. Washington, unsurprisingly, is shown to have enjoyed a solid run. The map below shows Washington’s 2.8 percent increase in PCPI is twice the nation’s 1.4 percent increase from 2017 to 2018. 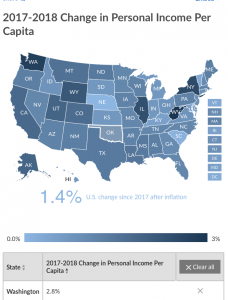 Nationally, per capita income rose 1.4% between 2017 and 2018 after inflation, about the same as the previous year’s 1.6%, according to a Stateline analysis of Bureau of Economic Analysis data. The most recent peak was 4% growth between 2014 and 2015.

This, however, was surprising.

West Virginia had the biggest per capita income growth in the nation, with a 3% increase to about $40,600 after inflation.

The boost in the Mountain State stemmed largely from natural gas and coal jobs, said Brian Lego, economic forecaster for the Bureau of Business and Economic Research at West Virginia University.

Yet, we’re dealing with growth from a weak base.

West Virginia still ranks next to last for per capita income, ahead of only Mississippi, despite the increase last year.

Washington’s growth is particularly impressive given that our state has long ranked among the nation’s leading economic performers.

The Oregon Office of Economic Analysis also has a good report on middle-wage jobs.

The nation’s largest metro areas turned around first after the recession and have seen the strongest gains overall. Given that many middle-wage jobs are in part driven by population growth, the fact that the big cities have seen the best employment and population gains means they are also more likely to recover their middle-wage jobs. Now, many of the nation’s secondary metros and rural areas are growing again — at least here in Oregon and across the West — but their overall gains are less pronounced than the big urban centers over the past decade.

The report includes this map, showing Washington’s middle-wage job growth to be among the nation’s most robust. 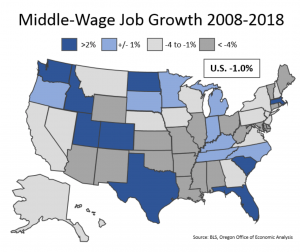 Yet, as the the expansion ages, projections for a slow Q1 remain consistent. Calculated Risk reviews the forecasts, concluding,

These estimates suggest real GDP growth will be around 2% annualized in Q1.

Again, we think a cautious approach to state budgeting makes sense. While it’s tempting to assume that the strong decade of revenue growth will continue unabated, experience tells us otherwise.