UPDATE:  The Tax Foundation yesterday released a critique of the ITEP study referenced below.

The governor felt strongly enough about one aspect of the Washington state tax structure that he repeated himself for effect in his state of the state address.

Although speeches aren’t footnoted, the source no doubt is the Institute on Taxation and Economic Policy. ITEP’s 2015 “Who Pays” report (the fifth edition) again finds that Washington State has the nation’s most regressive tax structure (regressive means low income taxpayers pay a larger share of their income in taxes than do high income people; in a progressive system, high earners pay a larger share). While that sounds bad, ITEP notes that Washington is far from alone.

Virtually every state tax system is fundamentally unfair, taking a much greater share of income from low- and middle-income families than from wealthy families. The absence of a graduated personal income tax and over-reliance on consumption taxes exacerbate this problem.

Despite ITEP’s lamentation, it’s not necessarily a problem. There are other factors to consider. Begin with the understanding that state and local taxes are not the only taxes paid by families and individuals. As this chart from the Tax Foundation’s Tax Freedom Day release last year demonstrate, federal taxes represent the largest share of taxes paid. To understand how taxes fall on income groups, it’s necessary to incorporate the effect of the progressive federal income tax. 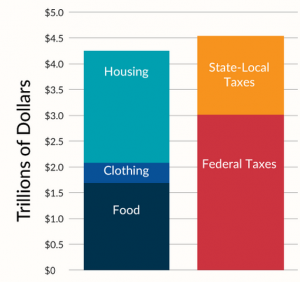 The most comprehensive analysis of the Washington State tax system was the report of 2002 Tax Structure Study Committee chaired by William Gates, Sr. The committee found:

Some additional analysis and commentary will be provided here that reveal a yet-to-be discussed major implication of the CBO report – almost the entire burden: a) of all transfer payments made to American households and b) of all non-financed government spending, falls on just one group of Americans – the top one-fifth of US households by income. That’s correct, the CBO study shows that the bottom three income quintiles representing 60% of US households are “net recipients” (they receive more in transfer payments than they pay in federal taxes), the second-highest income quintile pays just slightly more in federal taxes ($14,800) than it receives in government transfer payments ($14,100), while the top 20% of American “net payer” households finance 100% of the transfer payments to the bottom 60%, as well as almost 100% of the tax revenue collected to run the federal government.

How progressive the combined tax structure should be will always be a matter of political debate. Should progressive taxation be a policy objective, however, the federal government is best positioned to address the issue. When states adopt highly progressive structures, they increase the volatility of their revenue systems and create incentives for mobile affluent households to migrate to more friendly tax environments.

The 2015 tax policy debate in Olympia is just beginning. The level and distribution of the tax burden will always be a legislative concern. It’s a fraught discussion. And, as George Will has written, fair is the four-letter F word that “always bedevils tax reform.”