The Washington Research Council has released a major report, School Funding: Accounting for the Billions Spent in Response to McCleary. It’s a clear, comprehensive look at the funding history. Following the money, it also warns of possible funding inequities that could lead to a future court case. Here’s the Council’s overview:

In response to the McCleary decision, and as part of the Legislature’s adopted school funding reforms, state spending on public schools increased $14.244 billion or 110.0 percent from 2009–11 to 2019–21. Over the same period, all other state spending increased by just 52.0 percent.

In addition to increasing spending, the Legislature increased the state property tax and reduced school district levy authority. Statewide, enrichment levies as a percent of total district revenues dropped from 17.5 percent in SY 2017–18 to 12.3 percent in SY 2018–19. Despite the reduction in local levy authority, combined school property taxes (the state tax plus local enrichment levies) in 2020 are 33.0 percent higher than they were in 2017, the year before the first McCleary-related tax changes took effect.

Washington’s increased spending on schools is showing up in national school district spending and revenue rankings. In SY 2017–18 (the most recent year of comparable data), Washington schools ranked 18th in spending per pupil, 8th in district per-pupil revenues from state sources, and 32nd in district per-pupil revenues from local sources. These rankings are up from SY 2010–11, when they were, respectively, 29th, 15th, and 35th. District spending increased significantly in SY 2018–19—this is not yet reflected in Washington’s national ranking due to the data lag.

The state Supreme Court blessed the Legislature’s changes. But the influx of billions of dollars—especially for SY 2018–19—led to teacher strikes, double-digit salary increases, and school district claims of significant budget deficits. Meanwhile, with the regionalization factors the Legislature added to salaries in districts with higher home values, it has maintained previous inequitable funding. And there has already been an erosion of the levy limits that were put in place to help preserve equity and prevent districts from using local revenues to fund basic education, raising the specter of another McCleary-style lawsuit in the future.

That’s huge. And this,

There’s a lot of detail in the objective analysis. A few charts help tell the story. As the pie chart below shows, about one-third of the McCleary money went to teacher compensation. 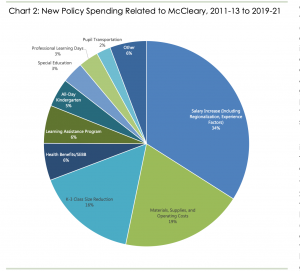 One of the final items the Legislature dealt with was school staff salaries, and these made up 34.0 percent of the state allocations for McCleary-related policy items from 2011–13 to 2019–21 (as shown in Chart 2). (Ultimately, funds allo- cated for other purposes also flow through to salaries, as the activity of teaching accounts for the highest portion of school district spending—59 percent in school year 2018–19.

The salary money caused tense collective bargaining sessions as we wrote in 2018. The WRC provides useful perspective. A snippet:

Initially (in EHB 2242), the Legislature limited average total salary increases for certificated instructional staff in SY 2018– 19 (which, as discussed below, was then intended to be a transitional funding year given the timing of planned property tax changes) to inflationary growth (3.1 percent). An exception was made for districts with average salaries less than the average salary allocated by the state: such a district could increase salaries so that its average salary equaled the salary allocated by the state.

Legislation in 2018 (E2SSB 6362) eased this restriction so that SY 2018–19 aver- age total salary increases could not be higher than inflationary growth, annual experience and education salary step increases, salary changes for staffing in- creases due to enrollment growth or new state funding, salary changes for professional learning, increases related to national board bonuses, increases to bring salaries up to the statewide aver- age allocation, or salaries for new staff. There was significant confusion about the effect of the restriction, which led to unsustainable salary increases and labor strife, as we discuss below.

Go to the report for more detail The history is useful. And it’s useful in helping understand the WRC’s warning about the next lawsuit. As the WRC writes, while the state is the primary funding entity, local districts allocate the money. There’s an inevitable tension in the model.

Washington has organized its school funding system so that the state is responsible for the funding while districts have some flexibility to raise funds locally. Local control over spending is good in that districts may be best positioned to determine what is important to their communities. But there is an inherent conflict between the principles of local control of district budgets and statewide equity. When local levies are allowed to supplement state funding, districts in property-rich areas will have more resources than those in property-poor areas.

Because making “ample provision for the education of all children” is the “paramount duty” of the state under the constitution, the state must either limit local control of levies in order to keep a semblance of statewide equity for students or continue to give local districts wide leeway (at the risk of future lawsuits). The alternative would be amend- ing the constitution.

As we wrote in 2016, Washington has been stuck in a cycle that is effectively prescribed by the paramount duty clause: “State school funding drops (due to recession or other priorities), local levies make up the difference, courts rule that the state must pay more, repeat” (WRC 2016). Given that the new levy lim- it lasted only a year, the cycle may not be broken yet.

Indeed, the state’s budgetary response to the current recession will be instructive. Will the state avoid cutting basic education spending (despite the fact that it now makes up over half of the budget), or will it go right back to its old ways? Initial indications suggest that ac- countability provisions put in place in response to the McCleary decision will not be enough.

We’ve been here before. As they say, plus ça change, plus c’est la même chose.