The U.S. Supreme Court’s Wayfair decision opened the door for states to capture sales tax revenue from Internet sellers. It also created uncertainties that continue to cloud the issue.

The Tax Foundation has reviewed relevant state tax policies to identify which states are best prepared and which have work to do.

Since the decision, states have begun considering actions that they might need to take to collect sales tax on internet transactions while adhering to the Wayfair decision. The Court stopped short of upholding South Dakota’s collection of remote sales taxes as constitutional but gave several reasons why the state’s law in particular and its tax compliance system in general would not be a burden on interstate commerce. This report reviews the Wayfair decision and evaluates existing state laws to determine what further action each state may need to take.

TF prepared this map, providing a good overview of the national situation. 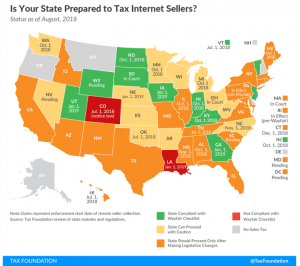 While Washington is in better shape than many, the Tax Foundation analysis puts our state in the “flashing yellow light” category, saying Washington should” proceed with caution.”

We expect there could be some action in the next legislative session.