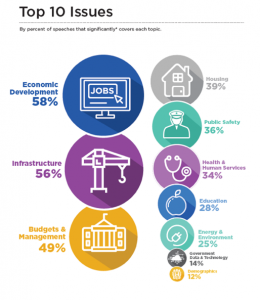 The National League of Cities has released “State of the Cities 2018,” an analysis of mayors’ state of the city speeches. The infographic above, from the report, highlights major issues gleaned from the review.

The analysis pinpoints specific tactics and policies, as well as broader policy directions, and finds that:

In an article on how cities and businesses are partnering to ameliorate the housing affordability challenges common to many cites, Route Fifty writes that the State of the Cities

“Mayors across the United States recognize that there isn’t enough affordable housing to go around,” the report said. In response, it continued, cities are looking to mixed-use development that combines residential and commercial uses in the same buildings.

Mayor Mary Lou Pauly of Issaquah, Washington, is quoted as saying: “In the future, our growth will be redevelopment–adding density and moving away from single-story buildings and expansive surface parking lots, to mid-sized and mid-rise buildings that are designed for mixed use.”

The NLC notes that the challenges faced by cities persist over time.

Read the report for more insight into urban priorities as seen by the mayors.