Some positive economic news today. The big headline is the 17.7% increase in retail sales from April to May. While it’s far below last year’s volume, it’s a sign that consumers are coming back as stores open.

U.S. retail sales jumped by a record 17.7% from April to May, with spending partially rebounding after the coronavirus had shut down businesses, flattened the economy and paralyzed consumers during the previous two months.

The Commerce Department’s report Tuesday showed that retail sales have retraced some of the record-setting month-to-month plunges of March (8.3%) and April (14.7%) as businesses have increasingly reopened. Still, the pandemic’s damage to retail sales remains severe, with purchases still down 6.1% from a year ago.

The Federal Reserve said Tuesday that industrial production — including output at factories, mines and utilities — rose 1.4% in May after plummeting a record 12.4% in April and 4.6% in March. Manufacturing output rose 3.8% last month as auto plants began to ramp back up; but production of cars and auto parts remained 62.8% below its May 2019 level…

The good manufacturing news comes with a flag.

Still, economists Oren Klachkin and Gregroy Daco of Oxford Economics warn that industry’s comeback is likely to be slow.

“Weak demand, supply chain disruptions, historically low oil prices, and heightened economic and virus-related uncertainty will constrain industrial momentum in the coming months,” they wrote in a research report. “The recovery will likely be two-phased: a short-lived, partial snap-back in output, followed by a sluggish and extended rebound.”

Still a lot of uncertainty, but any snapback is welcome.

And, the National Association of Home Builders reports a bump in builder confidence.

In a sign that housing stands poised to lead a post-pandemic economic recovery, builder confidence in the market for newly-built single-family homes jumped 21 points to 58 in June, according to the latest National Association of Home Builders/Wells Fargo Housing Market Index (HMI). Any reading above 50 indicates a positive market.

The NAHB graph shows the decline and late surge. 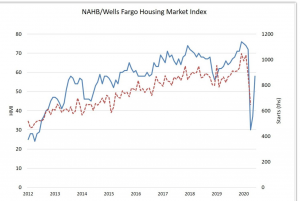 Previously, we wrote that some economists were predicting the economy is already in recovery. These three reports argue for some cautious optimism.