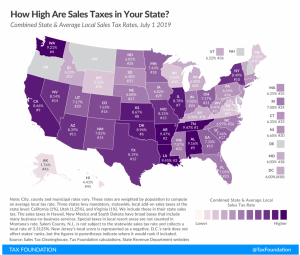 With all the chatter about Washington’s high consumption taxes, you might guess that the state has the highest sales taxes in the country. But you’d be wrong. That honor goes to the Volunteer State, Tennessee, according to the Tax Foundation.

In addition to state-level sales taxes, consumers also face local sales taxes in 38 states. These rates can be substantial, so a state with a moderate statewide sales tax rate could actually have a very high combined state and local rate compared to other states. This report provides a population-weighted average of local sales taxes as of July 1, 2019, to give a sense of the average local rate for each state.

Here’s the top and bottom five:

Tennessee and Washington do not have an income tax, but the other three high-sales-tax states do. The other factor is the sales tax base, which varies among states. As TF writes,

This report ranks states based on tax rates and does not account for differences in tax bases (e.g., the structure of sales taxes, defining what is taxable and nontaxable). States can vary greatly in this regard. For instance, most states exempt groceries from the sales tax, others tax groceries at a limited rate, and still others tax groceries at the same rate as all other products.[16] Some states exempt clothing or tax it at a reduced rate.[17]

Tax experts generally recommend that sales taxes apply to all final retail sales of goods and services but not intermediate business-to-business transactions in the production chain. These recommendations would result in a tax system that is not only broad-based but also “right-sized,” applying once and only once to each product the market produces.[18] Despite agreement in theory, the application of most state sales taxes is far from this ideal.[19]