This Labor Day sees a lot of Washingtonians still unemployed. The COVID-19 recession has frustrated forecasters and employers eager to resume business. And it has taken a heavy toll on the state’s Unemployment Insurance Trust Fund. Replenishing the depleted fund by increasing UI taxes puts the economic recovery at risk. There are policy options to mitigate the tax increases.

Unemployment insurance tax rates are adjusted annually and will be much higher next year.

After a brief discussion of how UI rates are calculated, Sjoblom presents a table of estimated simple rate class average tax based on the Employment Security Department’s trust fund forecast released last June. But, he says,

So he cites the ESD calculations,

Note, that’s a doubling of UI tax obligations in 2021, a year when many employers will want to bring back furloughed workers and employees will be eager to return to work. And the next year it gets worse.

By 2022, taxes that employers pay to cover state jobless benefits could rise to an average of $936 per worker. That’s almost three times the expected 2020 figure of $317, according to preliminary figures released Thursday by the state Employment Security Department (ESD).

And those are average increases: Employers who had more layoffs could see higher per-employee taxes.

The tax hikes are needed to replenish the state unemployment trust fund, which has fallen from $4.7 billion to $2.8 billion since March 1 after paying out benefits to so many laid-off workers. A new state forecast shows the fund will likely be insolvent by early 2021 , which will require the state to borrow federal funds to cover any shortfall.

While there are signs the economy is improving faster than expected, UI claims remain elevated. In June, Roberts explained,

Unemployment taxes have two components. There is an individualized “experience-based” tax, which is based on the average annual benefits paid to a specific employer’s workers over the preceding four years. Typically, the more layoffs a company has, the greater its experience tax rate. Employers also pay a “social cost” tax, which covers costs that aren’t attributable to a single employer.

The combined tax rate, which is levied on a portion of a company’s payroll, varies considerably: In 2020, total rates ranged from 0.10% to 5.7%, but were expected to average 0.91%. Prior to the pandemic, ESD expected the average to remain around 1% through 2025. The new forecast shows the average rate peaking at 2.74% in 2022 before gradually falling.

The impact of such increases on struggling employers cannot be overstated. The Tax Foundation reported in May that more than half of the states were acting to mitigate the UI impact. Washington appears with an asterisk that could be removed with executive or legislative action.

As states consider ways to contain the economic fallout from COVID-19, policymakers will want to ensure employees can return to work safely—and employers can rehire their employees—once the immediate public health crisis abates. One way policymakers can help expedite their state’s economic recovery is by protecting employers from facing higher UI tax rates at a time when they can least afford to pay them.

As of mid-May, 26 states and the District of Columbia have declared—mostly through executive order or labor department guidance—that COVID-19-related layoffs will not be charged against employers for purposes of calculating the experience ratings that determine their UI tax rates. This is a reasonable way to help protect businesses and industries that have been disproportionately impacted by mandated business closures and stay-at-home orders. It will also help ensure more businesses will be able to survive this crisis and rehire their employees once they can safely resume operations. 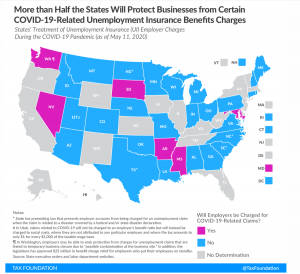 Meanwhile, six states—Arkansas, Maryland, Mississippi, Nevada, South Dakota, and Washington—have specifically said that based on current law and plans, employers will be charged for layoffs despite the extenuating circumstances surrounding this pandemic. (Washington has provided some flexibility; the state plans to charge employers for pandemic-related claims except for claims that arise due to the temporary closure of a business due to potential contamination of the business site. In addition, the legislature has appropriated $25 million to provide employers with relief from charges for employees who were put on standby.)

Last week, ESD’s  Unemployment Insurance Advisory Committee received a presentation by Dan Zeitlin, Employment System Policy Director for ESD. (The link is to a PDF of the 30-slide presentation, which provides an overview of the UI trust fund status, tax calculations based on the June forecast, policy options and more.) Some key takeaways:

As revenue collections experience has been better than forecast by ERFC in June, the September forecast may be less bleak than the forecast. If so, there may also be improvement in the UI forecast.

Also, the presentation included this set of options for the experience rating.

And for the social tax:

In short, there are steps the state can take to mitigate the anticipated UI tax increase and stimulate hiring.

We’re sure there are tradeoffs among the possible strategies, pros and cons to consider. But it’s encouraging to see the analysis taking place.

Expect much more on this in the coming weeks. We look forward to the discussion.