The National Academy of Social Insurance (NASI) has released its annual report on workers’ compensation benefits. The report covers data from 2017, and it shows that Washington’s benefit costs per covered worker were $766.59—the highest in the country. (Alaska came in second at $736.55.)

When you consider benefit costs as a percent of covered wages, Washington ranks fifth in the country (1.24 percent). According to NASI, covered wages in Washington increased by 30.5 percent from 2013 to 2017, which was the highest increase in the nation.

Although benefit costs are high in Washington compared to other states, they are declining here (they were $865.67 per worker in Washington in 2010).

Workers’ comp costs here have been a long time concern. The Washington Roundtable includes benefit costs as one metric in its Benchmarks for a Better Washington, noting most recently that (again) Washington’s costs are the nation’s highest (“50” in this case represents most costly). 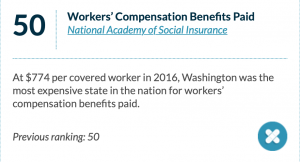 As the WRC writes, the Department of Labor and Industries has proposed a small rate reduction this year.

Last month, the Department of Labor and Industries (L&I) proposed a 0.8 percent reduction in average workers’ compensation premiums for 2020. If adopted, the average rate would decrease for the third year in a row.

The Association of Washington Business released this comment on the proposed reduction in September.

“We look forward to continuing to work with lawmakers and others to make Washington’s workers’ compensation more competitive, to reduce costs for employers and to bring economic prosperity to every corner of the state.”

The WRC also notes that the costs of Washington’s supplemental pension program have increased rapidly in recent years.

As I noted above, L&I is proposing an overall average rate decrease for 2020. The supplemental pension rate component of that would actually increase by 9.4 percent.

Still a cost factor worth watching.